Democratic Right to protest - you must be joking!!!

See how the Authorities react to a  peaceful CARNIVAL: 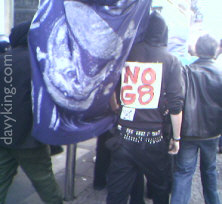 It was billed as a 'Carnival for Full Enjoyment', &, you know me, a small kid at heart, I love such playful expressions of human creativity. So, like a fool, I followed the pink & silver SAMBA BAND, with my red, green & yellow whistle....it was all very colorful - we even had a contingent of fashion-conscious continental kids in co-ordinated black hoodies & black bandanas, & a dedicated few carried rather fetching black flags!

Seemed like a bit of innocuous fun, an al fresco frolic, little more (or less) than vaguely symbolic street theatre...that is, till the villains of the piece arrived...

Assembling at W.Maitland Street (not far from the west end of Princes Street), a peaceful, orderly procession moved off (with police permission) down Torphichen Street, and was then directed by mounted police into Canning Street. Before we knew it, riot police had blocked both ends of the street & we were penned in. Ambushed!

A senior police officer made a loud-hailer announcement invoking Secion 14 of the Public Order Act 1986 as justification for the police cordon, which effectively detained over 200 people against their will.

However, he made a MISTAKE! He cited the WRONG LAW to justify the cordon, because not only does Section 14 P.O.A. NOT authorise the use of cordons, it doesn't even apply to PROCESSIONS (Section 12 is the relevant section). This must surely call into question the legality of the cordon.

The police were out in force. Their overtime bill must have been enormous. To justify such profligate expenditure of tax payer's money, they had to  fulfil a quota of arrests. They were looking for trouble &, if they couldn't find  it, by golly they'd create it.

They know they have the upper hand. They're good at making others feel bad. It's like a game or sport to them, & they get paid for it.

[Fashion note: have you noticed how British soldiers in Basra don't wear helmets, but Riot police in Britain do?! They also wear masks but forbid demonstrators to do likewise...]

[WILL FILL IN MORE DETAILS AFTER MY TRIAL...]

Three hours later, while waiting quietly to be let out of Canning Street, I am arrested for 'breach of the peace' ( & me a pacifist!). Somehow, after 25 HOURS in custody, this has mysteriously evolved into the following, detailed (& totally erroneous) charges:

on 04 July 2005 at Canning Street, Edinburgh you….[list of names] DAVID KING…[list of names continued] did form part of a mob of evilly disposed persons which acting of a common purpose did conduct itself in a violent, riotous and tumultuous manner to the great TERROR* (my emphasis)and alarm of the lieges and in

These malicious charges against me, which are a pack of lies from beginning to end, have still not been dropped nor have I been called to trial. They can have no valid evidence, because, I didn't actually DO any of the above, although I observed a few others engaged in some of the more minor activities detailed (eg sitting on the ground, which I fastidiously refrained from as I didn't wish to soil the white trousers I was wearing!)

Coming soon: more fascinating details about my arrest & imprisonment (25 hours before I was allowed to see a solicitor, denial of food & medical attention etc, the brutality & illegal behaviour of the prison staff etc etc; 29 hours before I was released on bail but effectively deported from Scotland so I couldn't take part in any further anti-G8 activity...)

Before the War Criminal Blair's Regime makes this page illegal

on grounds of incitement to rebellion or something, 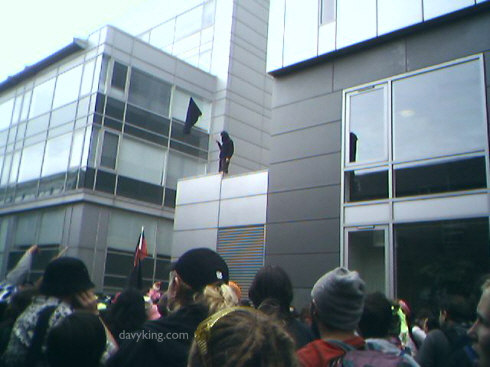 (xenophobia, n'est-ce pas, as if there aren't any Scottish Anarchists!)

THEY CAME LOOKING FOR TROUBLE…

THEY GOT THEIR WISH

Then, the quiet understatement in much smaller print:

Now, I'd suggest that in terms of world impact, the latter is more important news.

If that had been the main headline, it would have provided a meaningful context

for the former sensationalist report, & made sense of why people were demonstrating,

instead of suggesting it was merely gratuitous.

In my experience, it really was the police who caused the trouble.

They obligingly fulfilled the prophecies of the tabloids

& justified their overtime pay by arresting their quota.

I personally did NOT go 'looking for trouble', but they, the police,

caused me no end of 'trouble' & got paid overtime for their 'troubles'.

(More will be added to this page, when I have the time & energy,

& as further developments unfold, so check back here...)

( not much was allowed in Canning Street Edinburgh on 4th July 2005!)