(notes from a medium-sized archipelago)

The plane descends thru a brown cloud of chemical pollution. As it touches down, there is a spontaneous cheer & a round of applause from the Filipinos among my fellow passengers in Economy: it’s the very welcome end of a very long haul flight & for the Filipinos  a return home.

Stepping out of the air-conditioned airport, the heat & humidity hit me with physical force. It’s like a Turkish Bath or the hothouse at the Botanic Gardens. I have arrived in the Tropics. It’s my first time ever in the Torrid Zone. Coming from a British winter as I have, a shock to the system to say the least. Even the local policemen wear towels round their necks to wipe away the sweat.

From the air I’d seen the immensity of Metro Manila spread out beneath, with its shanty town shacks next to skyscrapers – the stark divide between rich & poor. Down on the ground, I sit in a taxi for hours getting some frustrating, first-hand experience of gridlock...

YOUR MAN IN MANILA

Got the 'Humph'at Casa Blanca,

Sunset, sitting on the wall by Manila Bay, 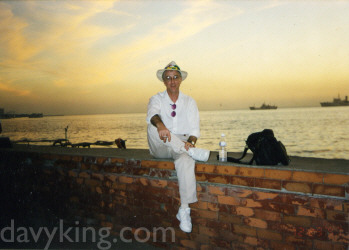 'dock of the bay'

a Boy in the Boondocks