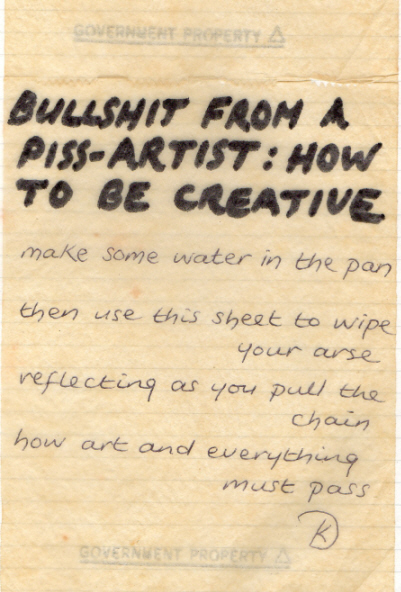 Back in the mists of history (circa 1982), I composed a satirical piece called 'The Bum', which I copied onto a toilet roll. In performance, I sat on a toilet & read it out, unrolling as I went along! Yards & yards of paper.... quite amusing, tho I say so myself.

Years before that, (when I was working for the Department of the Environment), I got hold of some 'Government Property' toilet paper - it was the hard, shiny kind - unkindly abrasive to a sensitive anus.

Had the novel idea of printing verse on it (or indeed novels!), but, in those technologically primitive days, didn't have access to the necessary equipment, so I used felt tip & biro instead.

To your right is a scan of a very ancient piece of toilet roll, discoloured with antiquity. It's so fragile I had to mount it onto paper (the lines you see in the background). "Government Property" watermark just discernible.

It refers to the old-fashioned type of toilet that had a chain one had to pull in order to flush it. But maybe it plays on the idea of the human condition being like slavery in chains....