Psalm 90:10 "The days of our years are threescore years and ten." by King David, The Bible.

Heard about three score & ten when I was a young kid. At that time, it seemed a long way away. Now, am rapidly approaching it:

69, my beloved William Blake's age when he died

Wagner was 69 when he croaked (very musically, of course.)

Age of Aldous Huxley when he died? You've guessed it: 69 of course!

The late, great Bowie's death was at 69

My little legacy hardly matches theirs.


Not all die of natural causes - Saddam Hussein was executed by hanging at the age of 69.

that's quite a mouthful when you're young"

Some, if not all, 69 year olds are, of course, capable of participating in & enjoying such an athletic activity. Thankfully I do! 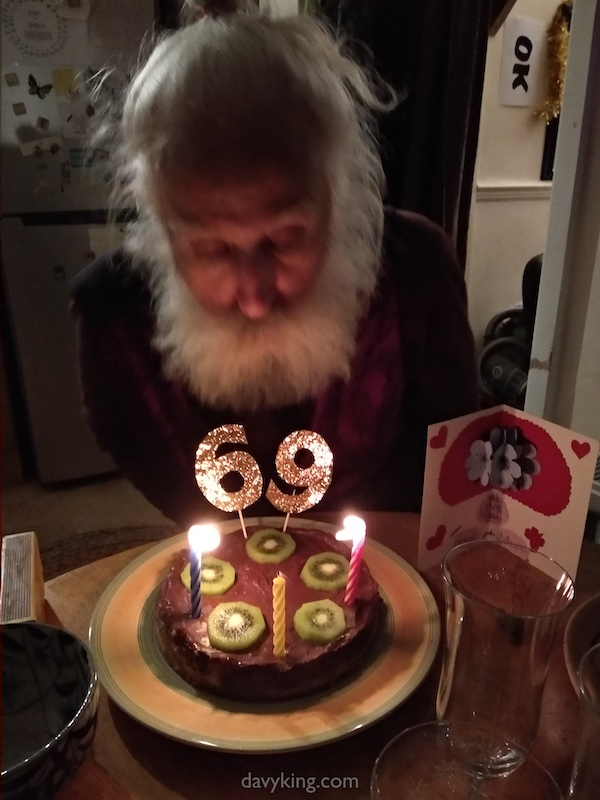 "Not dark yet but it's getting there"

The venerable Thich Nhat Hanh refers to "Continuation" Days rather than Birthdays. Gives one a different perspective. "Continution" refers to the idea of there being no birth & no death. Scientifically speaking, matter can't be created or destroyed, & simply changes form. Before so-called birth, I existed in my mother & father, & in turn their grand-parents & their ancestors, way back to the first protoplasmic life. One could speculate that unborn/undying awareness enters at the moment of conception, when sperm & ovum fuse, thus becoming embodied. Hence, what I call "I" can be characterised in a narrative sense as a "continuation".

So, in terms of name & form, this is currently "my" 69th orbit round old SOL.

69 years PLUS one day old.  I am now in the 69th year of my age. I'm in my 69th year now. Am now as always was, in terms of immaculate, immediate awareness of sheer being, uncluttered by impermanent "stuff" & "non-sense", undamaged by dents & blows of "my" ephemeral, embodied existence.

Taking nothing for granted, I wish to express great gratitude simply for being alive...

please don't quote me on this...